The Commission should continue to evaluate new scientific data relating to the safety of PIP implants.

In 2015, PIP Action Campaign members won a review into the dangers of PIP implants. The European Ombudswoman responded to our 2015 Complaint, 174/2015/FOR against the Commission with Further Remarks: 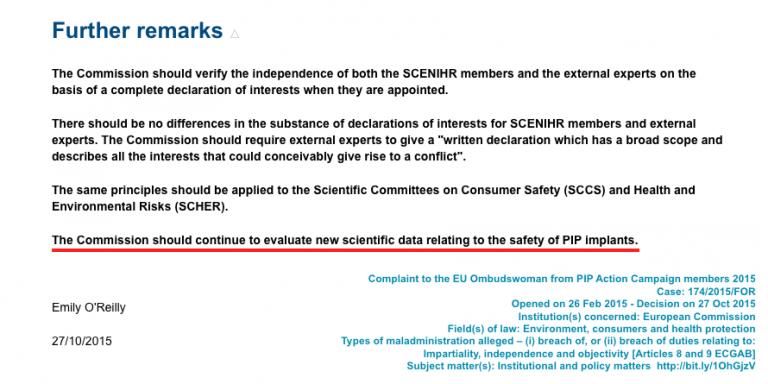 In 2016, members followed up on the Ombudswoman’s Further remarks with a campaign “Dear Emily” in which PIP Action members wrote to the Ombudswoman telling her how they had been affected by PIP & Rofil implants and the difficulties and uncertainties all women with PIP are facing.
In 2017, we received word from the European Commission’s SCHEER Committee saying, while there is indeed new evidence, there is insufficient new evidence to justify a review.

In 2018, PIP Action Campaign’s members are calling on the Ombudswoman once again.